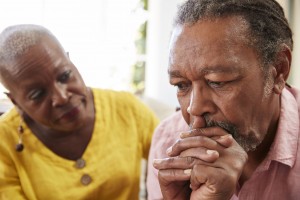 Various disorders and factors contribute to the development of dementia. Neurodegenerative disorders result in a progressive and irreversible loss of neurons and brain functioning.

Currently, there are no cures for these types of disorders. They include:

Other types of progressive brain disease include:

– Mixed dementia, a combination of two or more disorders, at least one of which is dementia

Other types of dementia can often be halted or even reversed with treatment. For example, normal pressure hydrocephalus, an abnormal buildup of cerebrospinal fluid in the brain, often resolves with treatment.

In addition, certain medical conditions can cause serious memory problems that resemble dementia. These problems should go away once the conditions are treated. These conditions include:

– Side effects of certain medicines

– Drinking too much alcohol

– Blood clots or tumors in the brain

– Head injury, such as a concussion from a fall or accident

Doctors have identified many other conditions that can cause dementia or dementia-like symptoms. These conditions include:

– Huntington’s disease, a hereditary disorder caused by a faulty gene

– Subdural hematoma, bleeding between the brain’s surface and its outer covering

The overlap in symptoms of various dementias can make it hard to get an accurate diagnosis. But a proper diagnosis is important to get the right treatment. Seek help from a neurologist—a doctor who specializes in disorders of the brain and nervous system—or other medical specialist who knows about dementia.